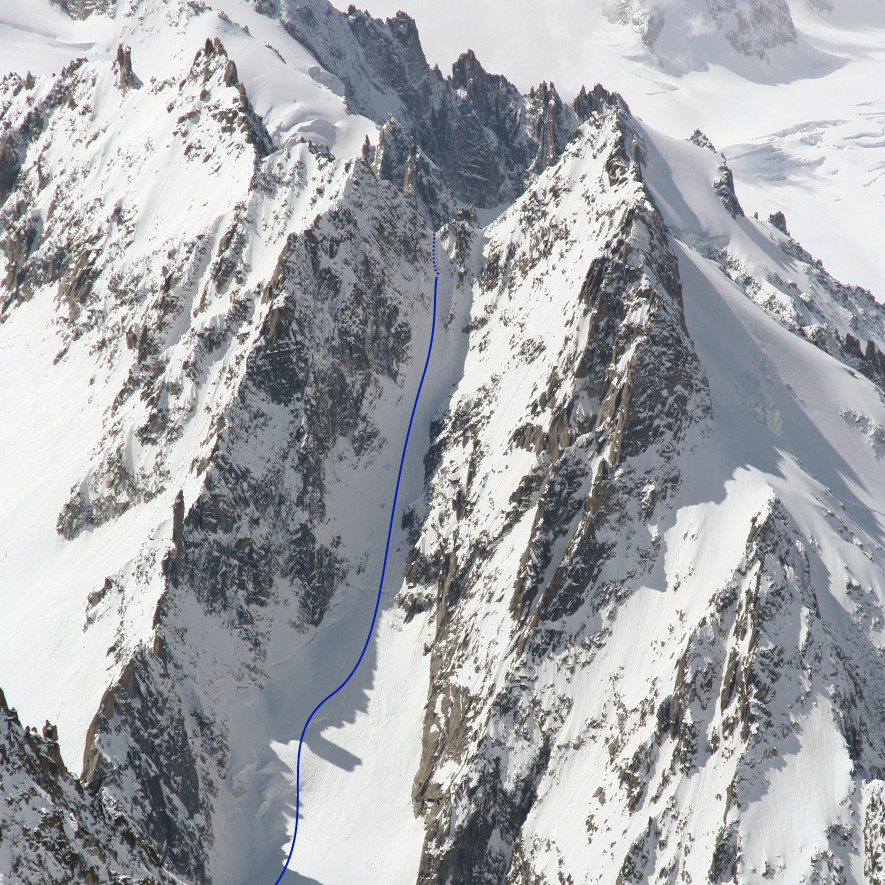 It is spring in Chamonix and finding good skiing becomes a bit difficult. The last snowfall came with strong wind, and everything that faces the sun for at least a couple of hours is sliding off.
The only chance to find good snow during the last days was to follow these rules: North sector, wind protected, steep and above 2500m. There is not much to do in a single day when you want to stay on less extreme terrain. We thought the Capucin Couloir on Aiguille du Tacul might be a good choise and so did two other groups 😉

But the technical skills were quite high, I’d say normal for Chamonix: A group of 4 guides had already prepared the rappel, while we (two) and a group of another three guys went up the southern slope of the Col du Capucin.
Fast rappels, facing backwards, with skis on. Always two people skiing and two on the rope worked perfectly. From the Col we all reached Leschaux Glacier in less than one hour. The couloir itself was sluffed off, the lower half skied really well, while to top section was quite a struggle with the own mind.

We all met in town later the day: Using their ropes in exchange for some cold beers is a square deal.

Ski season started late for me this time, but it started with a bang. Skiing two beautiful steep lines in the Aiguilles Rouges range, both in good company, was the best way to finish 2019! Aiguille de l'Encrenaz, Brèche Martin couloir NE (29.12.2019) *powder* Tête Plate, couloir N (31.12.2019) *grippy* #skiing #chamonix
La Palma flow 2: Hands down, my favorite run on this island! Can't wait to do it again soon 🤘
1 min of La Palma flow. Today we did three big runs in the east again: LP4, LP3, LP6 and of course from El Pilar DH back to Los Llanos. @mountainridelp
First @world_enduro race is in the books! 🤘🔥💯🤛💥🤙 Maybe I have underestimated it a little as the level - both in skills and fitness - even in amateur category is pretty damn high. I was hoping for a better result, but in the end I'm just super happy that I have crossed the finish line in one piece. With 42 min for the timed stages I lost 10 min on P1. Total excluded time is 6.5h which does not leave much of a margin to complete the race (72km, ⬆️1400m, ⬇️2300m). Still such a great experience, awesome trails and amazing people! Definitely can't wait for the next one! 😜 For the future I'll keep in mind: no holding back on any stage and the liaisons are for recovery 😅 #enduromtb #braap #mtb #finalenduro #finalefreeride #finaleligure #trophyofnations #ews #ews100 #enduroworldseries #orbearallon #myorbea